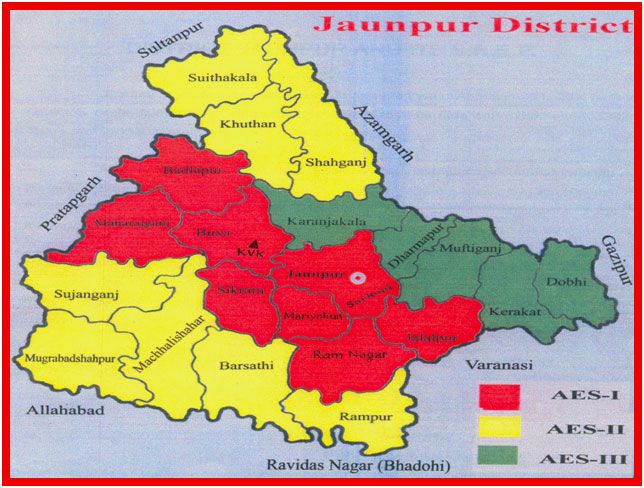 Jaunpur district has a climate consistent with that of the Northern Plain and Central Highlands including the Aravalli range, hot semi-arid eco-region 4.3 and hot dry ecoregion 9.2. The temperature varies between about 4 °C (39 °F) and 44 °C (111 °F).The annual normal rainfall is 1,098 millimetres (43.2 in). The monsoon season occurs from the third week of June to the first week of October. Normally, there are 46 rain days per year of which 31 occur in the monsoon season. The district regularly suffers drought and pestilence.

The main field crops of Jaunpur district are: rice, maize, pigeon pea, pearl millet, blackgram wheat and chickpea. Other crops are onion and potato and crops for fodder. The crops are grown with both rainfall and irrigation. There are cattle (both local low yielding and crossbred), and local low-yielding buffalo as well approximately 29% of Jaunpur's population is employed. Approximately 40% of those employed work in manufacturing, 26% work in trade and commerce, 19% work in other services, 8% work in transport and communication, 4% work in agriculture, 2% work in construction, and 2% are marginal workerss goats, sheep, backyard chickens and pigs and occasional dairy farms. There are 43 government reservoirs and many more private water sources.The Shri Ganesh Rai Post Graduate College established in 2009, offers a one or two year agricultural science course and is affiliated to the University of Purvanchal.


Description of Agro-Climatic Zone & Major Agro Ecological Situations. (based on soil and topography)